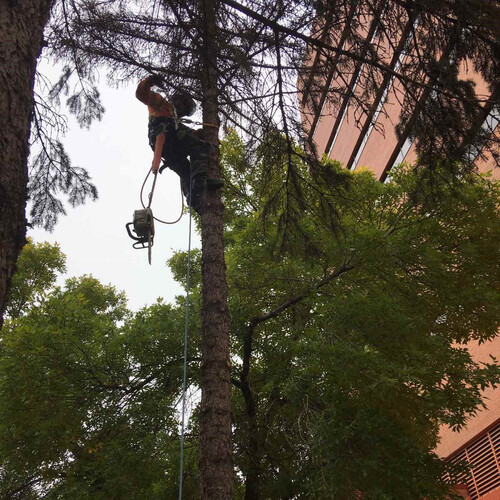 The term urban forest is “an emerging concept that not only incorporates trees, but other vegetation in streets, parks, plazas, river embankments, wetlands, railway corridors, community gardens and on buildings as well as the soil and water that supports them.”[1] According to Tree Canada, “urban trees exist in an inherently difficult environment” including limited space to grow both above and below ground, compacted and often contaminated soils, sharing space with utilities, de-icing salt, and other human impacts on their growth and health.[2] Despite these challenges, trees and stretches of urban forest provide many environmental, economic, social and cultural values to urban and periurban communities. Urban forests and trees are also susceptible to disease, insects, climate change, wildfire (especially at the urban-wildland interface), urban sprawl and lack of genetic diversity.

A series of best management practices (BMPs) was established in a study of urban forest management strategies across Canada. They include the following considerations:[3]

Tree maintenance. Management plans should include pruning, removal and monitoring of existing trees, no net loss of trees and integrated pest management. Maintenance should also include robust GIS databases of tree inventories, efforts to minimize damages to trees and plans for natural disasters and fires.

Planting and ecological considerations. Municipalities should aim to increase diversity of species, with no species exceeding 15% of the total tree population. Canopy cover goals should be set at 20-40% increases over a 20-year plan, with a focus on increasing native species and forest-like plantings.

Climate change. By increasing native species in the urban forest, municipalities will improve their climate adaptation abilities. If the overall canopy cover increases by 20-40 years over 20 years, cities’ and towns’ emissions should be offset by at least 0.5% and carbon storage should increase by 2% over ten years as trees grow.

Social and educational. Engagement, awareness and identifying urban forest as an integral part of the community are key. Involving the broader community in the urban forest strategy through volunteer opportunities, workshops, seedling giveaways and the identification, designation and maintenance of heritage trees can build stewardship for the urban forest.

Policy, legislation and administration. Trees and urban forests can be referred to formally as green infrastructure and municipalities can work with stakeholders to establish policies to protect trees from development on private and public lands. Public consultation and participation is important to the success of this BMP.

Economics. Municipal urban forest management plans must include a financial analysis of the cost of implementation. Financial supports may be available through various funding streams and can be partially used to incent planting in the community. To analyze the value of the urban forest, tools such as UFORE and iTree can be utilized.

Temporal-spatial considerations for planning. Urban forest management plans can be as long as 60 years and should include timelines for when reporting and monitoring is done. Public and private trees are included.

Successfully planning for, maintaining and/or increasing an urban forest requires adaptive management. Using the BMPs above will help municipalities and developers alike to fully understand the value of urban forests and trees and plan to manage them in the long-term. Challenges that local governments may face in implementing this example of NBS include securing funding, development pressures, gaining support from stakeholders, and establishing laws and policies for urban forest management.[4]

A study conducted in Toronto, Ontario in 2014 quantified the value of each urban tree at roughly $700[5] in terms of the multiple benefits that trees provide the municipality, including:

Urban trees and forests play a key role in mitigating the effects of climate change. Trees sequester carbon from the atmosphere, reduce stormwater runoff and protect infrastructure, while lowering ambient air temperatures, resulting in a decrease of the heat island effect. Trees also provide shade and improve air quality in cities, while trees and forests increase biodiversity and habitat for birds and other species of wildlife, plants and fungi.

Increasing the forest cover or number of trees in a city or town can have many positive impacts on a community. “The presence of urban green spaces can encourage positive social interactions that cultivate social cohesion in ways that enhance health and well-being”[6] and there are documented physical and mental health benefits to people living near urban forests and trees. Additionally, this example of NBS provides recreational opportunities in urban green spaces and forests, including walking, cycling, foraging and wildlife viewing. Urban trees and forests also decrease the heat island effect of cities, making communities more comfortable in summer (while also providing shade) and decreasing energy costs to cool buildings. Green spaces and urban trees help to improve air quality, aesthetic value, and real estate marketability of neighbourhoods.