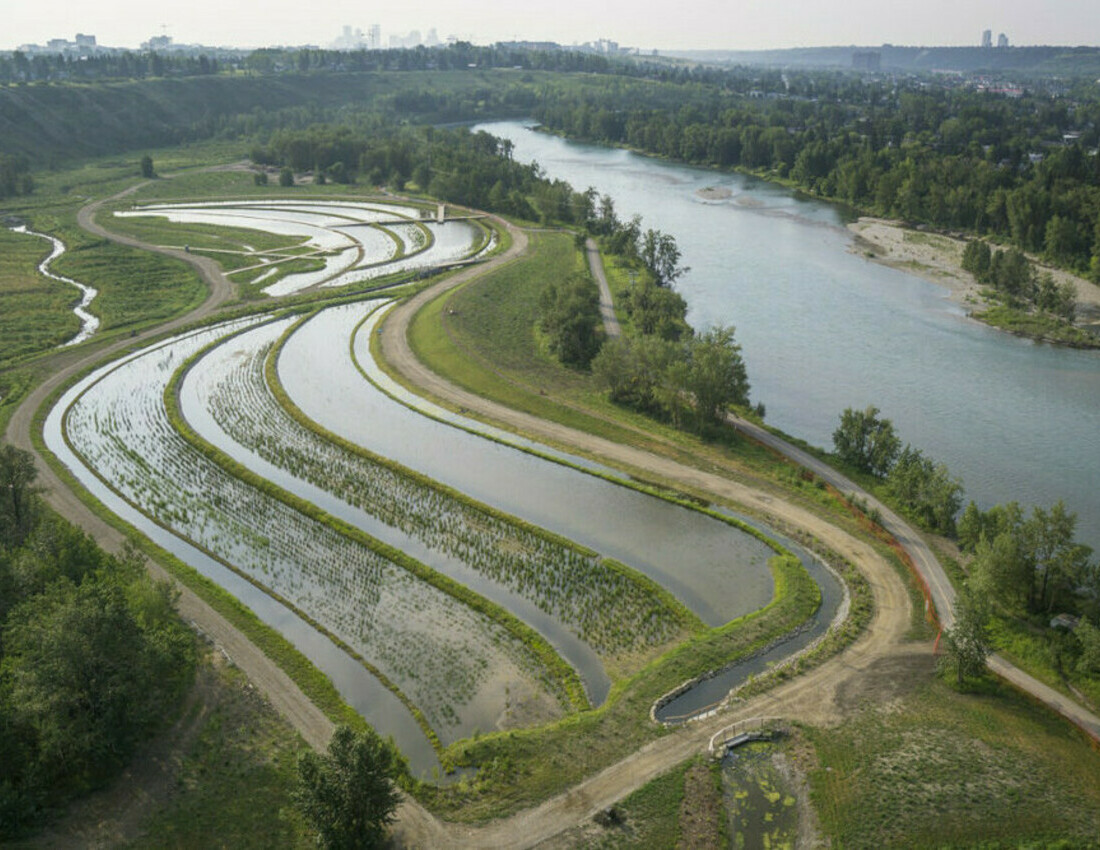 Dale Hodges Park in the City of Calgary is an excellent example of NBS in practice. What was once an abandoned gravel pit is now a verdant site with a nautilus pond and stormwater wetlands designed to treat runoff from a large catchment area before the water returns to the Bow River. Completed in 2019, this new space is in its entirety a work of art, a treatment facility and a park with multi-use trails, offering educational, cultural, and recreational opportunities to citizens in addition to the enhanced habitat for wildlife and biodiversity on the site.

When the City of Calgary purchased the decommissioned gravel pit, the municipality saw an opportunity to not only reclaim the site, but to implement NBS to treat stormwater and create a park for its citizens to recreate in and learn about stormwater treatment. The nautilus pond and stormwater wetlands remove at least 50% of sediments before runoff returns to the Bow River. The City engaged Sans façon, as part of the public art program WATERSHED+, to have an artist leading the design team in order to integrate creative thinking about how to bridge the two design intents, one informed by ecological restoration of the landscape, the other with water resource engineering.

The City of Calgary purchased the contaminated grounds of the Klippert Concrete gravel pit in 2010. The catchment area (see photo gallery for map) of water that flows to the site was identified and, by incorporating a nature-based solution, the City integrated stormwater treatment of approximately 10% of Calgary’s runoff into the reclamation of the site. The City’s Parks and Water Resources Departments began planning the project shortly thereafter and concluded in 2019. During the planning process, extensive public engagement was done and Sans façon as part of the WATERSHED+ program, O2, AECOM and Source2Source were contracted to design the park. Sans façon’s role was to creatively weave the ecological goals from Parks and the functional goals from Water, creating a design that expands the possibilities of connection and appreciation of the complexities of watershed management. The initial designs prior to Sans façon’s involvement was a traditional stormwater pond(s) not accessible to the public, surrounded by a park.

The driver behind the existing design was to use stormwater treatment as an opportunity for public engagement, making the water's journey through different stages visible throughout and creating a variety of habitats as part of the restoration of the ecological integrity of the landscape. Instead of a standard imperceptible and visually disconnected treatment system, the path of stormwater through the park is exposed. The different stages of the active treatment process are designed as distinct environments defined by their specific treatment functions, and the transitions between the stages are highlighted. Open water, running water, marshland, riparian and wet meadows all are present as the stormwater creates habitat, is cleaned and demonstrates the processes in play.

Policies and legislation that guided the planning of Dale Hodges Park included the Alberta Environmental Protection and Enhancement Act, and Calgary’s Biodiversity Strategic Plan, Bowmont Park Management Plan, Stormwater Management Plan, Wetland Policy, and Riparian Policy. Through the implementation of this nature-based solution, the City of Calgary has restored a critical riparian area along the Bow River and contributed to their goal of a no net loss of urban wetlands within the City.

Dale Hodges Park exemplifies several business models associated with NBS, including vacant space, risk reduction, green health and green education. The City of Calgary Water Resources and Parks Departments and the City's Public Art program spent a total of $26.8 million on the reclamation of the site and the implementation of NBS, public art and recreational infrastructure on the site.

Values derived from this initiative include:

By creating a series of wetlands along the river, the City of Calgary has taken steps to improve water quality in the river and watershed health in the Bow River basin. Stormwater wetlands improve water quality by filtering sediments. They also mitigate overland flooding by slowing the flow of storm surges. Wetlands also sequester carbon and create habitat for many species of plants, birds, waterfowl, insects and invertebrates, and mammals, increasing local biodiversity. The reclamation of the gravel pit into a park also allows for increased wildlife connectivity to adjacent green spaces along the Bow River, including Bowmont Park.

Adding nature back to cities has a positive impact on mental and physical health and provides social opportunities and places to gather and recreate. The Dale Hodges Park project transformed a derelict gravel pit into an aesthetically pleasing and inviting park with a multi-use trail system for pedestrians, cyclists, joggers, bird watchers, and public art and engineering enthusiasts alike. The collaboration between art, engineering and landscape architecture helps create a deeper sense of connection to place for visitors and provides the public an opportunity to observe stormwater treatment. 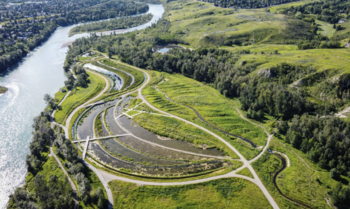 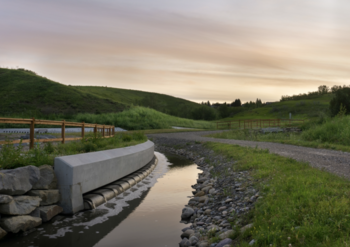 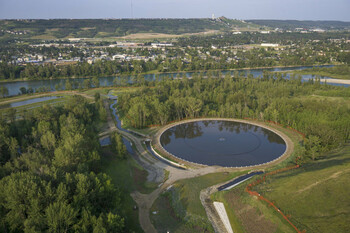 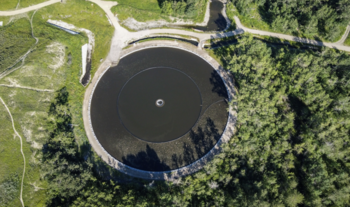 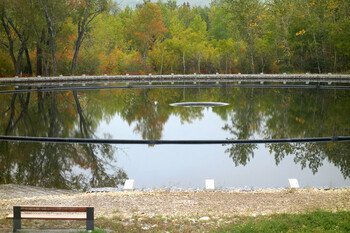 Mirror Reflection off of Nautilus Pond At Dale Hodges Park. 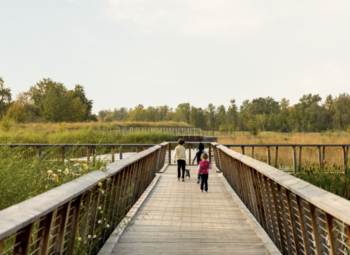 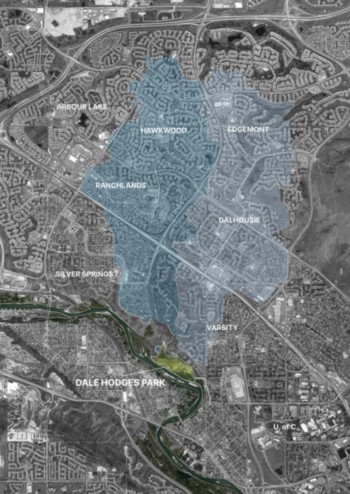